The apostrophe (or the lack of) hits the headlines! 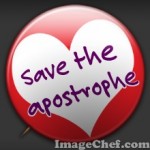 If it wasn’t for the fact that this particular story came so soon after Christmas I would have been tempted to think it was 1 April!

I heard it first on Radio Five early one morning and then read it on the BBC website, and the news was that Waterstone’s had announced it would now be known as Waterstones. A subtle difference, and one that many won’t even notice – let alone be bothered by it – but it had become a story that, momentarily at least, was being actively discussed in the public domain.

I had a wry smile on my face that day – so grammar and punctuation do still matter. But sadly, other conventions appear to be having a stronger influence. The Managing Director of Waterstones (it pains me to type it that way) stated that the new spelling will make the brand name more ‘versatile’ for the digital world. So there we have it, a national chain of bookstores (bookstores no less!!) no longer feels the apostrophe has any value and the only useful punctuation is to be found in .co.uk or .com. It’s a tragedy.

Thank goodness for Sainsbury’s and (never thought I’d say it) McDonald’s, both of which seem content to retain grammatical good sense – at least for now. I don’t want to encourage my children to eat the stuff that Ronald McD churns out, but it’s ironic that this brand is now a good example to point to when we look at the use of words in our environment. Now I’ll have the interesting dilemma of drawing their attention to the brand, only to deny them even a sniff at a Happy Meal!

But on a serious note, I feel really disappointed that a brand such as Waterstones felt that this was a right and proper move. I don’t know when Morrisons dropped the apostrophe from its brand name, but I’ve never felt comfortable with that – and I recently had to double check that Leiths (the restaurant) wasn’t Leith’s. Maybe the moral of the story is that recognisable brands that have built up a reputation can get away with it, but a small business trying the same strategy may be more likely to suffer as a result. Because I do still believe that, at some level, we are still influenced by where and how those small marks are used.