My favourite ad for the Olympics 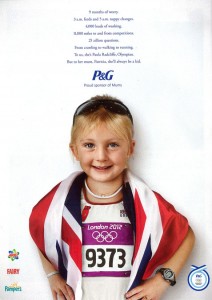 I absolutely loved the Olympics and found myself glued to the TV for most of the two weeks, jumping up and down, screaming and shouting my support for Team GB. My children had flags and we waved them with gusto, the sound of our national anthem being played 29 times gave me a sense of pride I never knew I possessed, and when our athletes received their medals (gold, silver or bronze, it made no difference), I blubbed along with the best of them – no surprise there!

Before the Games started I’d already identified my favourite advertising and by the end of day 16 it was even more so. To me, Proctor & Gamble’s ‘Proud Sponsor of Mums’ campaign was a fabulous – and very simple – twist on the Olympic theme. It sums up perfectly what goes on behind the scenes as children grow up to become athletes and Olympic medallists (okay, I know the example refers to Paula Radcliffe who pulled out of the marathon) and the support they receive from their families.

Yes, P&G are selling nappies and washing powder, but doesn’t that sum up every mum’s role? Looking after a child’s basic hygiene needs goes without saying, getting up early every weekend to ferry the kids to one sports event or another also tends to go with the turf. Did Mrs Brownlee know that it would lead to seeing two sons sharing the podium after their amazing performance in the Men’s Triathlon? Did Mrs Hoy ever imagine that the entire nation – and much of the world – would share her anguish as Sir Chris cycled his way to his next gold medal and into the history books?

There’s the saying that behind every great man there’s a great woman, but no one’s ever come up with one for mums. That’s why I like P&G’s ads so much. It reminds us of the fact that each and every one of our Olympic heroes was just another child growing up, discovering what they enjoyed doing, where their talents lay. And it allows us to dream for our own children – which of us will be the mothers of ‘Team GB: the next generation’? Which ties in rather nicely, I think, with the whole legacy angle of London 2012.

So right now, I am in negotiations with my boys – the eldest is thinking the 200 metres in 2020 and reckless youngest is angling for BMX racing in 2024 – and imagining them with medals around their necks. Who knows if we’ll be living the dream in years to come. What I do know right now is that there’s another load of washing to do!