Getting back into the swing 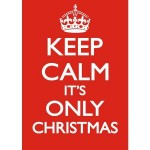 So Christmas is over for another year and it’s time to get back to the real world and the business of making a living. I’m sure we’d all agree that it hurts for a while.

When I was skimming through my Facebook news feed (probably when I should have been doing something far more important) one particular entry by a friend pretty much summed up the situation. Like me, she’s a mum with school-age children and work-life balance largely governed by school holidays; during the two-week break she managed to do very few of the jobs she’d planned to do and the house descended into a chaotic state of untidiness. Her conclusion was that she gets far more done when she has less time – but she did have fun.

At the beginning of the Christmas break, two weeks felt like forever; there was so much time for festive fun, plus plenty of days for catching up with all those tasks that had been building up over the previous weeks and months. So once the immediate excitement of Christmas was over, the relatives despatched and/or visited, I was looking forward to getting the house straight, tidying bedrooms, getting on top of admin and all the rest.

But – there was so obviously a ‘but’ coming, wasn’t there! – with all the visiting came late nights and badly needed lie-ins, lazy and lengthy breakfasts that stretched into lunch, and I was lucky to be ready to face the day before early afternoon. And then there were so many new DVDs to watch, so how could I not curl up on the sofa with the kids – and a modest helping of chocolate – to watch a good film together (I promise we did get out, it’s just that after a bike ride that turned into an assault course it took two days to dry out our shoes!).

So on the children’s first day back at school, having dragged myself out of bed at the proper and correct time, got through the usual rush of breakfast, sandwiches, last-minute ironing and polishing two pairs of shoes (that I had managed to ignore for the entire holiday) moments before we left the house, my friend’s comment sprang into my head and I thought how right she was. It also reminded me of an interview I read many years ago when Nicole Farhi was the big name in fashion. Describing her work regime, she said that she believed the more you do, the more you can do. I’m sure she was by no means the first to coin this phrase, but I was so taken by it I wrote it into my notebook at the time and it’s stuck in my head ever since.

By the time I got to my desk my brain had definitely cranked up several gears, thinking back to where I’d left off and what needed to start happening – not without a slight sense of dread and several ‘I can’t cope’ moments, I hasten to add. Before the day was out I had an urgent brief on the desk, a meeting under my belt, two briefing meetings organised and a new business enquiry. With a very busy January now ahead of me, those lazy days seem an age ago already, but I’m glad to have been able to enjoy some downtime and to recharge the batteries. I’m now ready and raring to go (and how long is it until Easter?)!