Case Study: Why the direct mail creative concept is so important to a campaign success

During the summer I received a piece of direct marketing through the post that bemused me somewhat. Seymours Estate Agents is a local company, very successful and pretty good at what they do, but I really wasn’t sure about this particular campaign.

First of all, the exe 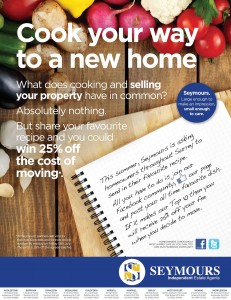 rcise in itself will have been costly – a print run sufficient to reach thousands of surrey residents doesn’t come cheap – which, in my opinion, slightly misses an essential point. Facebook is all about low-cost (or no cost!) marketing that puts businesses on a level playing field, no matter with they are a local start-up or a multi-national corporation, yet Seymours saw fit to circulate a campaign raising awareness of their Facebook page.

Next, the message itself. A question is posed: what does cooking and selling your property have in common? Apparently, it’s ‘absolutely nothing’, yet surely cooking and your home have plenty in common, and what is this meant to achieve anyway? And then there is the competition angle, which adds further confusion.

So did it work?

I visited the Facebook page a number of times to see how the campaign panned out, and I’m honestly not sure that Seymours enjoyed a great deal of ROI on this one. For a company with good coverage of the Surrey area, the page has relatively few Likes (203 to be precise at the time of posting this blog), so if the campaign was meant to increase brand awareness I think it probably failed. Similarly, if it was meant to attract more property sales, well I didn’t see a huge amount of participation in the competition either.

Maybe part of the problem is how Seymours treat their Facebook page. It’s being used primarily as a media/news distribution channel, rather than creating an engaging dialogue with their audience and followers. Yes, they’ve fully embraced the idea of using images, and the competition angle is a good idea, but it’s the execution that is letting them down.

Here’s a company trying to blend traditional forms of marketing with the more edgy world of social media – and falling somewhat short, in my opinion. And it’s all down to the concept. Direct marketing can be incredibly effective, but for a campaign to be successful the concept and messaging have to be clear, single minded and immediate – not trying to achieve too many things at once. Printed communications are showing no sign of decline. The Royal Mail has even invested heavily in technology based on forecasts of growth, so direct marketing is here to stay for the foreseeable future. But if you’re going to do it, make sure you do it right!

What’s your experience of using direct marketing? Has your business benefited from it? Have you seen great campaigns or some absolute howlers? We could probably all learn a thing or two from both good and bad examples.